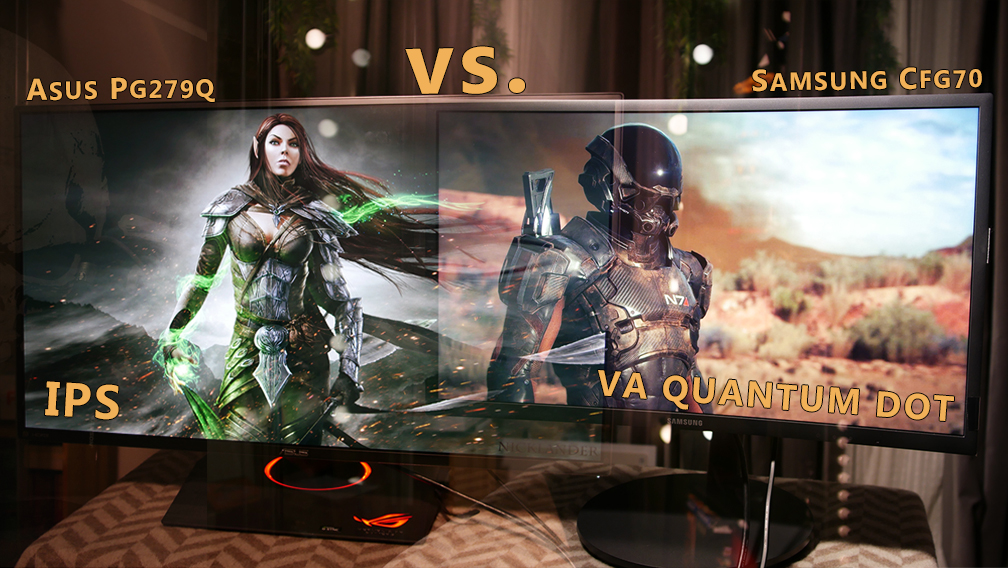 In this comparison, I've compared the Asus PG279Q with a WQHD (2560x1440) resolution and IPS against the Samsung CFG70 with a Full HD (1920x1080) resolution and a Quantum Dot VA panel. But why the hack I've compared such different monitors? Its because I'm really impressed with the overall image quality of the Samsung CFG70 and to compare IPS vs VA blacks. Following topics I would like to compare: Black leve, homogeneity, and illumination, colors, Full HD vs WQHD in general, ULMB vs Samsungs backlight strobing/scanning, viewing angles for bright and dark image content, motion blur and ghosting. You can find both reviews separately here (Samsung) and here (Asus).

Asus foot stand is MUCH better. Adjustments are much more comfortable and the overall processing and stability the PG279Q is the clear winner. As next the Asus only needs 24 cm space from the wall while the Samsung needs around 38 centimeters. This, to be honest, is just crazy. Samsungs foot stand in my personal opinion really is not good.

Samsungs panel coating is a little bit less matt. On test photos and in the video you will not able to see the difference, unfortunately. In general, a less matt panel coating gives you an overall better image quality, colors, and contrast while a more matt panel helps to reduce reflections. The curve of the Samsung also has the downside that reflections are a bit more visible across the whole panel. I personally would prefer a glossy/glare panel. The coating of the Samsung wins. The curve, in my opinion, is not that good.

The design, of course, is personal taste. The Samsung CFG70 has a pretty nice design but I personally like the Asus PG279Q a bit more. The Asus has thinner bezels and a higher quality processing, even if the Asus frame/bezel design has issues while pressuring against the panel which results in worse IPS Glow. The Samsung could score with its curve design but I personally prefer a flat display, especially on 24" and 27" inch.

Where the Asus PG279Q definitely wins is that it has a USB hub while the Samsung CFG70 doesn't have.

Both monitors offer a very good OSD menu. The Samsung, however, has a tiny bit better OSD while it has own presets and 3 quick switch macro buttons. The Asus otherwise has a better joystick. The Samsung CFG70 has a black equalizer, the Asus PG279Q doesn't. If you want to brighten darker areas, you have to do within different gamma settings at the Asus.

The red LEDs from the Asus or the blue Arena Lighting from the Samsung? You decide.

According to the grayscale test, Asus shows a bit more details in blacks, even with the lower contrast. Samsungs Quantum Dot colors. The Samsung has the "more standout" colors (slightly more 3D). The IPS shows the more natural colors. In general, The Asus in a direct 1:1 comparison has a clearly visible green tint, which even is not easy to remove within color temperature settings whereas the Samsung has a more "transparent" image. For games like Firewatch, for example, I prefer the Asus while it's just too reddish and saturated on the Samsung whereas sci-fi or horror games on the Samsung looks fantastic.

Of course, the Asus has a sharper image with its WQHD resolution. So you have to decide what you prefer and which graphics card you currently have. Do you want to upgrade in the next time? You should compare different graphics cards and benchmarks for different games. You also have to set your personal priority: More fps vs a sharper image? While working with Premiere, Photoshop, Excel etc. the Asus wins clearly for productivity.

Here the Samsung clearly wins. Still, you should consider that the Samsung has the VA Glow which is mostly visible at darker image content. The CHG70, for example, has less VA Glow as same as the AOC Agon AG322QCX. At the Asus, we clearly can see some backlight bleed. within the black level, of course, the Samsung is much better.

An IPS panel, of course, has the better viewing angles, but however only applies when we talk about brighter image content. At darker image content an IPS panel also has its weaknesses. The amount of the perceived IPS Glow strongly depends on the viewing angles. So in my review beginnings, a TN panel was my favorite for dark image content, because of no IPS and VA Glow. Now, since I've made more experience with many other monitors I can tell you that I prefer IPS over TN and VA, since the Asus PG279Q has very, very, very... huge issues with IPS Glow compared to the competition (Acer, Viewsonic, AOC, Eizo). The CFG70 here is better than the Asus PG279Q in my opinion. This does not mean, that it is impossible to get a PG279Q with good IPS Glow conditions. At the CFG70 you have an "iris" in the middle of the screen, where you have perfect image quality. Around this iris, you can notice the VA Glow pretty good. The closer you sit to the CFG70, the smaller the iris will be.

At bright image content (without ULMB) the difference is very slight, the Asus is maybe a little bit faster with a tiny bit less motion blur. When using ULMB you can see that the Asus eliminates the complete motion blur with a very sharp image within the ufo test from blurbusters. While using backlight strobing, you still can see a tiny bit motion blur within the Samsung with the advantage of a little bit less ghosting. The "problem" in the Samsung is the VA typical smearing. Even the Samsung is better than most other VA panels on the Full HD VA market, you still will notice smearing easily in darker image content (dark objects behind a dark background for example).

For horror, sci-fi, and in general games with much blacks, the Samsung has overall the better image quality. Compared to a "better" IPS monitor with less Glow I would say that it depends. It also differs from person to person while the Asus PG279Q also has a better color stability in brighter image content, even the Samsung CFG70 has the more intense colors, because of Quantum Dot. I've created a chart, in which I have distributed points by categories. Some categories are personal preference I think so that you can check which topics are more important for you. 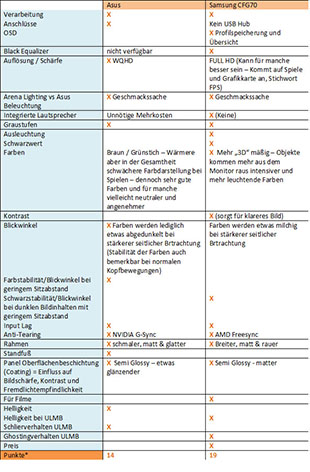 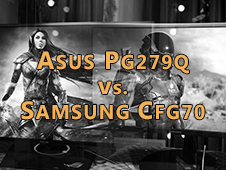 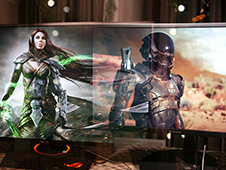 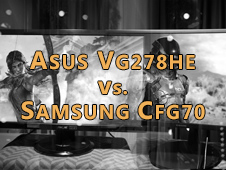 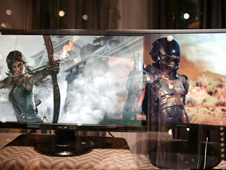 No comments so far. Be the first!